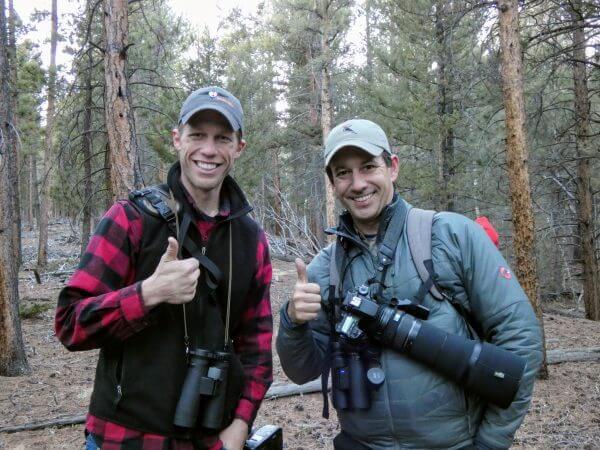 On Day Two of our Colorado birding tour, Jeff and I were met at our hotel early (5 a.m.!) by Christian Hagenlocher who currently lives and works in Buena Vista.  Christian is a terrific birder and knows this part of Colorado like the back of his hand.  In the darkness, we drove west from Buena Vista in Christian’s Subaru (completed with studded snow tires) up to Cottonwood Pass (12,126 feet) frequently stopping to listen for owls.  We also listened for White-tailed Ptarmigan which Christian had recently been hearing from the far rocky slopes as the birds give a few contact calls first thing in the morning.  It was COLD but very calm and we did hear a few squawks but nothing definitive.  We also missed ptarmigan during a hike at the summit but the views were terrific.

Back down in Buena Vista (“down” is a relative term as BV is at 8,000 feet), we cruised various neighborhoods where we found both Lewis’s Woodpecker and a flock of noisy Pinyon Jays–two more birds for Jeff’s life list!   After a delicious Green Chile Philly sandwich, Christian had us walking off our lunch on private land.  We’d almost given up when out of nowhere an adult Northern Goshawk materialized overhead, took a look at us, and cruised off into the forest.  Wow, we were ecstatic at finding this elegant and charismatic bird of the western forests!  This was likely the same bird Christian has written about previously.

In between birds, we talked a lot about Christian’s own Big Year in 2016 when he became the youngest person to record more than 700 species (he wound up at 750!)  We highly recommend you read more about Christian’s birding adventures at The Birding Project.  Tired but elated, we drove up and over Monarch Pass on the 90-minute trip southwest to Gunnison where we hoped our next big target was waiting!  Stay tuned for Day Three!